This is the third and last post about the evaluation of automated trading robustness. The first was about evaluating a trading strategy at first glance, the second about the stress tests, and now, I will take about the Stochastic modeling.

I was initially foreseen to present to you the stochastic modeling in my last post about robustness but finally, I preferred to present this test in a separate post to facilitate your reading.

What about Stochastic modeling?

Definition of the stochastic test

The test of the stochastic is very important in robotic and in industry. What is more, when the robot has artificial intelligence like an autonomous car which will have some interaction with human beings.

The stochastic test simply consists to apply little variations on the environmental properties in which the robot will operate. These variations could also be applied to the internal properties of the system.

Purpose of the stochastic test

The stochastic test tries to measure the degree of flexibility of an autonomous system. It is a kind of stress test used to validate the robustness of a system. We want to be sure that the robot will continue to be efficient even if there are some changes in the environment.

To validate the stochastic modeling test, the following condition must be completed :

Application of the test on Prorealtime

Back to the spread increase test

The only environmental property that we can modify on the Prorealtime platform is the spread.

How to process stochastic modeling on Prorealtime?

It is impossible to apply variations on the quotation historical of an asset with Prorealtime apart from the spread. However, it is perfectly possible to launch stochastic modeling only on the internal properties of a system. Thus, we will apply little variations on the values of the variables implicated in the decision-making as the opening, the management, and the closing of an entry.

Validation requirements of the test

And secondly, we will test all the combinations of little variations on all the variables in the same sample. This is the global test of stochastic modeling.

What we are trying to find?

We trying to verify that the automated trading system is slightly under-optimized. That means that the system has a sufficient degree of liberty to accept a change in the environment into it will operate in the future.

When you launch the optimizer of the variables, it sorts the result from the largest to the smallest gain. And it will naturally choose the value which gives the best performance. It is very tempting to choose this value, but it is often an over-optimized value.

The following chart represents the gain curve and you can see that the best value is a kind of peak :

That means with only a little variation of 1 point, the total performance of the strategy falls to 20%. The unitary stochastic modeling will help us to avoid this risk on our strategy.

Interpretation of the result

The initial value of the RSI, here 14 periods, would not have passed the unitary stochastic modeling test. Because its previous and next value provoke a loss on the performance of the system:

Stochastic modeling helps us to know if a chosen value is surrounded by losing values. Now, you will have to process this test on all the variables implicated in the decision-making. This is laborious work, but it is important because neither the Gradient Descent algorithm nor the Walk-Forward optimization can detect this particularity.

I advise you to duplicate your system to create a specific version dedicated to stochastic modeling.

To perform this test, you have to apply little variations on all the variables of the system implicated in the decision making thanks to the optimizer of the variables.

For this example, I will launch a test only on three variables to facilitate reading the result. To run a test, I have to open the optimizer of the variables as with the previous test. After that, I added three volatility variables that are based on different periods. The variables are « ecarTypeSmallMax », « ecarTypeMiddleMax » and « ecarTypeLargeMax » :

Initial values of the variables

The initial values of these three variables are the following :

These are all the combinations that will be tested by the global test :

These the table containing the result of all the combinations created by the optimizer of the variables:

Interpretation of the result

If the majority of the combination are losing, that indicates that your system is over-optimized. The risk is that your automated trading system will not tolerate a change in the market in the future. However, you probably have remarked that some combinations perform significantly lower than the initial result (3.31% against 7.36%).

It would be better to consider that the test is validated only if most of the combination gives a performance that is not significantly different from the initial performance. In this case, there are only three combinations that are not passed the test.

Generalization of the stochastic modeling

To facilitate your understanding of stochastic modeling, I told you that a little variation of the value of a variable implicated in the decision-making must not provoke a large variation of the system’s performance.

In reality, the performance of the system is not the alone measurable metric. It is recommended to analyze all the properties of the system as drawdown, the volatility of performance, time in the market, etc.

Thus we can generalize the stochastic modeling by the below way :

The limitations of the stochastic modeling

Each mathematical and machine learning model has limitations, and stochastic modeling does not escape the rule. The main limitation often comes from the decision threshold. A decision threshold is a value from which we consider that the test is succeeded or failed. Stochastic modeling needs several metrics that could provoke decision-making problems. The most important thresholds are included in the definition of the model.

The first comes from the definition of what is a “little variation“. This definition is too approximative to be directly used in a decision-making process. A « little variation » could also be 0.1% than 5%. To resolve this problem, I often chose the next lowermost unit variation from the initial value.

The third limitation is about the percentage of combinations having a result significantly different against the initial result, also for the same reasons.

This threshold problem concerns most mathematical and machine learning models that make it difficult to use these models in reality. These models can only provide aid to decision-making, and you should ensure that the obtained result is exploitable.

You will find out some other explanations of stochastic modeling by following links :

The “SEVEN PILLARS TO BUILD A WINNER PROREALTIME BOT” is a PDF containing 63 pages allowing you to improve the success of your automated trading system.

Validate an automated trading strategy thanks to stress tests

The secret to winning in the future with a trader bot

How to measure the acceleration thanks to an indicator on Prorealtime?

Get the free e-book ! 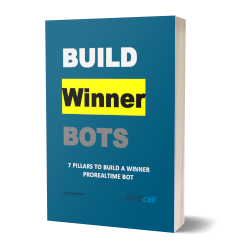 The "SEVEN PILLARS TO BUILD A WINNER PROREALTIME BOT" is a PDF containing 63 pages allowing you to improve the success of your automated trading system.

Close Menu
We use cookies on our website to give you the most relevant experience by remembering your preferences and repeat visits. By clicking “Accept”, you consent to the use of ALL the cookies.
Do not sell my personal information.
Cookie SettingsAccept
Manage consent

This website uses cookies to improve your experience while you navigate through the website. Out of these, the cookies that are categorized as necessary are stored on your browser as they are essential for the working of basic functionalities of the website. We also use third-party cookies that help us analyze and understand how you use this website. These cookies will be stored in your browser only with your consent. You also have the option to opt-out of these cookies. But opting out of some of these cookies may affect your browsing experience.
Necessary Always Enabled
Necessary cookies are absolutely essential for the website to function properly. These cookies ensure basic functionalities and security features of the website, anonymously.
Functional
Functional cookies help to perform certain functionalities like sharing the content of the website on social media platforms, collect feedbacks, and other third-party features.
Performance
Performance cookies are used to understand and analyze the key performance indexes of the website which helps in delivering a better user experience for the visitors.
Analytics
Analytical cookies are used to understand how visitors interact with the website. These cookies help provide information on metrics the number of visitors, bounce rate, traffic source, etc.
Advertisement
Advertisement cookies are used to provide visitors with relevant ads and marketing campaigns. These cookies track visitors across websites and collect information to provide customized ads.
Others
Other uncategorized cookies are those that are being analyzed and have not been classified into a category as yet.
SAVE & ACCEPT
×